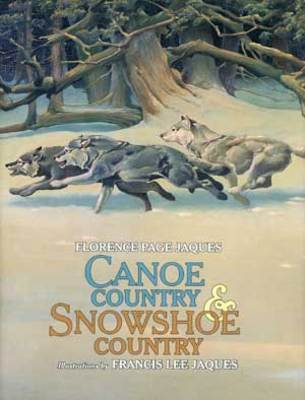 When Canoe Country and Snowshoe Country were first published, in 1938 and 1944, respectively, readers were charmed by their loving portrayal of the wilderness of northern Minnesota. Florence Page Jaques and her husband, Francis Lee Jaques, became celebrated champions of the Boundary Waters and its majestic environs. Now, for the first time, these classics of nature writing and art -- depicting all the moods and seasons of the north woods -- are brought together in one beautiful volume.

A well-traveled New York sophisticate, Florence Page Jaques fell in love with northern Minnesota during her first trips to the region, and recounted those early travels in Canoe Country and Snowshoe Country.She writes of the excitement of traveling by foot, canoe, snowshoe, and dogsled. Weeks of solitude canoeing through the Boundary Waters are interrupted by encounters with the denizens of the north country: Native Americans preserving the vestiges of traditional culture, colorful and sometimes eccentric lumberjacks and trappers, and hardworking homesteaders.

Her vivid stories are matched by her famous husband's spectacular drawings; Francis Lee Jaques captures the delicate power of Minnesota's seasons, from the cascading falls of summer to the frozen lakes of winter.