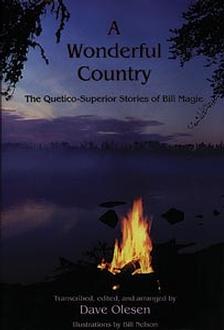 Transcribed, edited, and arranged by Olesen. Illustrated by Bill Nelson. When Bill Magie began taking canoe trips in the wild country along the Minnesota-Ontario border, there were places where the lakes were so crowded with logs heading to the mill that his group put their gear on a horse-drawn wagon to portage to a spot where they could paddle. There were other places where they could travel for two or three weeks and see no one except an occasional Indian family. Bill's stories originate from the Canoe Country-today's Boundary Waters.

But they are not the dry facts of the past. (Some would argue that there are few facts to be found in these stories!) Instead, they are full of the elements that sill draw us to this wilderness area today--wolf howls, sparkling water, storms, solitude, stillness, adventurous undertakings, relics of bygone days, campfires and camaraderie. Bill tells tales of lumberjacks and trappers, surveying the border, flying bush planes when flying anything was a novelty, camping before high-tech gear and freeze-dried food were even imagined, hunting and fishing when failure meant hunger. Paddlers will find familiar names--Curtain Falls, Prairie Portage, Granite River, Knife Lake, Basswood, Saganaga. This welcomed new edition includes photographs, collections, and illustrations by Bill Nelson.