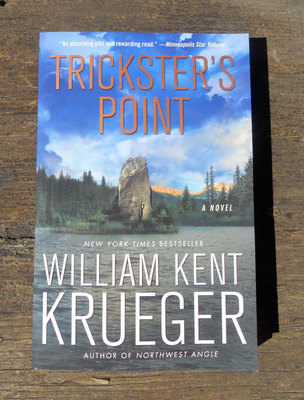 Cork O'Connor is sitting in the shadow of a towering monolith known as Trickster's Point, deep in the Minnesota wilderness. Beside him is the first Native American governor-elect, Jubal Little, who is slowly dying with an arrow through his heart. Although the men have been bow hunting, this is no accident. The arrow in the governor's heart belongs to Cork.

When he becomes the primary suspect in the murder, Cork understands full well that he's been set up. As he works to clear his name and track the real killer, he recalls his long, complex relationship with Jubal, the Native kid who aspired to be a populist politician and grew to become a cunning man capable of treachery and murder. As Cork looks deeply into his own past, he comes face to face with the many motives, good and ill, that lead men and women into the difficult, sometimes deadly, political arena.

With crisp writing filled with the twists and turns his fans have come to expect, Krueger delivers another knockout novel of suspense.