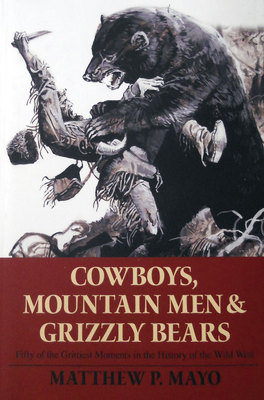 Cowboys, Mountain Men, and Grizzly Bears: Fifty of the Grittiest Moments in theHistory of the Wild West

From slaughters, shootouts, and massacres to maulings, lynchings, and natural disasters, this book cuts to the chase of what draws people to the history and literature of the Wild West. Matthew P. Mayo, noted author of Western novels, takes the fifty wildest episodes in the region's history and presents them in one action-packed volume. Set on the plains, mountains, and deserts of the West, and arranged chronologically, they capture all the mystique and allure of that special time and place in America's history.

Read about: John Colter's harrowing escape from the Blackfeet; Hugh Glass's six-week crawl to civilization after a grizzly attack; Janette Riker's brutal winter in the Rockies; John Wesley Powell's treacherous run through the rapids of the Grand Canyon; the Earp Brothers' hot-tempered gun battle at Tombstone; and General Custer's ill-advised final clash with the Sioux.