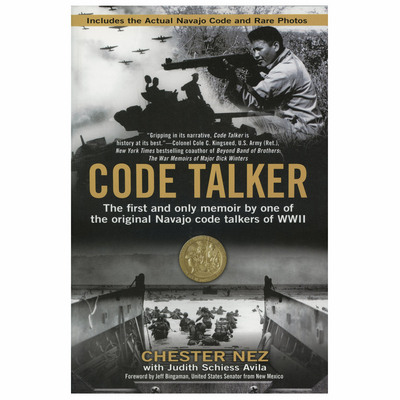 The first and only memoir by one of the original Navajo code talkers of WWII-includes the actual Navajo Code and rare photos. Although more than 400 Navajos served in the military during World War II as top-secret code talkers, even those fighting shoulder to shoulder with them were not told of their covert function. And, after the war, the Navajos were forbidden to speak of their service until 1968, when the code was finally declassified. Of the original twenty- nine Navajo code talkers, only two are still alive. Chester Nez is one of them.

In this memoir, the eighty-nine-year-old Nez chronicles both his war years and his life growing up on the Checkerboard Area of the Navajo Reservation-the hard life that gave him the strength, both physical and mental, to become a Marine. His story puts a living face on the legendary men who developed what is still the only unbroken code in modern warfare.